On the Wednesday, July 24th, 2013 broadcast of This Week in Oncology at 2PM Pacific/5PM Eastern our special guest is entrepreneur, social media thought leader and Forbes Contributor Dan Munro aka @danmunro. 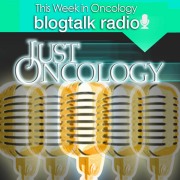 This catchy headline caught my attention since part of our mission at This Week In Oncology is to eliminate the esoterica from ‘oncology-speak’ and to present the significance of the discoveries, trends and developments in the cancer care and dignostics in plain english for more general consumption.

Much progress has been realized in medica oncology of late with a fair amount of the promisesd upside of ‘personalized [or individualized] medicine’ often pointing to better outcomes via more targeted treatment of specific tumors based on their unique genetic signature.

So called ‘big data’ is in the news as ubiquitous technology, connectivity, the declining costs of massive data dragnets and disease specific mashups affords insights previously inaccessible to reseachers, clinicians and others interested in the diagnosis and/or treatment of oncology.

We’ll get Dan’s takes on his piece and see how he sees the confluence of these trends coming together for the benefits of patients.

To listen live or via archived replay, click here.

Another of the highlights of FutureMed 2013 was the track on ‘the future of oncology’. In addition to the promise of favorably impacting both the early diagnosis and thus treatment outcomes for pancreatic cancer via the discovery of Jack Andraka, Ronald Levy, MD of Stanford wove a beautiful narrative of hope and promise that might best be represented by the following quote:

My dream is to get rid of chemotherapy and do it with the immune system.. 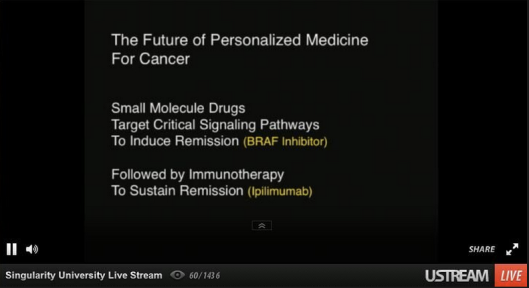 Meanwhile one could not be but immensely inspired by the clinical decision support and powerful AI platform demonstration detailed by Marty Cohn, MD. Witness ‘IBM Watson Demo: Oncology Diagnosis and Treatment’ developed in conjunction with Memorial Sloan-Kettering Cancer Center: 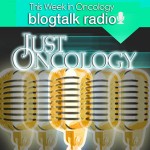 On Wednesday’s broadcast of This Week in Oncology our guest Dr. Jeff Hall makes his second appearance on the show. The topic was ‘Biomarkers: their emerging clinical significance in the diagnosis and treatment of cancer’.

Dr. Hall has over 20 years of experience in the life sciences industry, and is currently the Vice President of Clinical Education at GenOptix. He holds a BA in Biology and Chemistry from UC Santa Cruz and a PhD in Biochemistry from UC Berkeley. Dr Hall was the first author on the landmark 1990 Science paper describing the location of BRCA I on chromosome 17q.

GenOptix is division of Novartis. For broader context see webcast by Novartis CEO Joseph Jimenez to the JP Morgan Healthcare conference, and for the deck click here.

To listen to archived replay of broadcast, click here.

It was 1967.  I was an intern in the UCLA-Wadsworth VA Rotating Internship Program when I reported for my physical as part of the Berry Plan deferment.  For the younger set, physicians and dentists could elect to delay military service until completion of their first year of residency training, and we could elect our branch of service we preferred to serve in.  I chose the Air Force.  On the History portion, I stated that I suffered with asthma since childhood.  Within short order, I was notified of disqualification by the Air Force, my Draft Board reclassified my status to IA, and I was drafted into the U.S. Army, losing my deferment!  I sought legal advice, pronto. 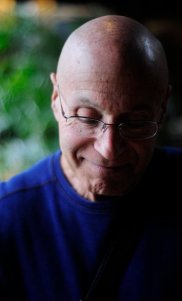 After one year of legal maneuvering, during which time an independent physician certified I should be disqualified from military service altogether, my attorney informed me that all appeals had been exhausted.  I had two options:  go in as a captain or be drafted as a private.  I elected the former.  His parting words were:  “At least you won’t go to Viet Nam.  Not with all the documentation”.  My orders read “Saigon”.  Modifying the Sinatra song:  “It Was” NOT “A Very Good Year”.

I resigned myself to serving my time in Viet Nam.  My wife and one year old daughter would live in Hawaii near her father during my tour.  But, my wife admonished me to try one more time to appeal what was obviously unfair.  So, before we left for Ft. Sam Houston, I humored her and called the Pentagon.  I explained the situation to a Major Baker who was new at his post.  He discovered that all of my records had been shredded!  I sent more copies of my documents to a panel of physicians for its review with no guarantee that their decision would change my orders.

On reporting to Ft. Sam, the entire new group was addressed by the commanding officer.  Sighting his rank (a bird colonel), we greeted him with the loudest groan I’ve ever heard.  But I’ll never forget his advice to us:  “Let’s face it, we gotcha.  You can be miserable all this time.  Or you can make the best of it”.  He went on to say that we would have one year (I had two) at a stateside base during which time we should avail ourselves of all the opportunities to do something other than practice medicine 24/7.  Two weeks later, I was called into the same bird colonel’s office and advised Major Baker had called.  I was not going to Viet Nam!  I’ve said a prayer for Major Baker every night since.  And I did everything reasonable to appeal the decision and then let it go.  No longer a victim.

My two years at the Rock island Arsenal were terrific.  One Sunday I was rounding at a local hospital when a general practitioner (that’s what the terminology was in those days) commented about the then recently enacted Medicare legislation:  “Mark my words.  This is the beginning of Socialized Medicine”.  From that point on, any proposal to organize our practices was met with suspicion.  We were victims of external pressures and resisted most changes to the status quo.

Over time, this attitude has shifted to a more proactive position, dealing with the situation at hand (i.e., making the best of it) and trusting in an outcome that can be managed.  I was impressed by an article entitled:  “Oncology patient-centered medical home and accountable cancer care” by John D. Sprandio, M.D. in the December 2010 issue of Community Oncology, Volume 7/Number 12, pp. 565-572.  This medical home model has been adapted to oncology from primary care as both are assuming more responsibilities for patient care and are under severe financial restraints.  For oncologists, the situation is complicated by “by the perverse methodology of paying physician practices for the drugs they administer after discounts from pharmaceutical companies-a model that has eroded over the past several years”.  A detailed description of the model is provided and successes to date listed, giving hope that we can deal with proposed healthcare reform in a positive manner.  Current and future challenges are discussed.  These include:

The author concludes by stating:  “None of the other efforts that payers are considering provides a sustainable business model for community oncologists”.  It was refreshing to read a well thought out plan addressing present issues rather than the old whining and complaining of the past.  Rather than victims, we become survivors.