Recently, a friend of mine asked me for medical advice concerning his condition, Barrett’s esophagus.  When the diagnosis was initially made, he was advised he would require annual screening endoscopies with random biopsies.  But, on his last visit, my friend was told he didn’t need another procedure for 5 years, with no explanation.  “What’s up?”  Since he had a copy of the biopsy report (not with him, but at home), I advised he read it and look for the word dysplasia.  Wikipedia defines dysplasia as

So far, I haven’t heard back.  But this stimulated me to review current recommendations on the subject.

Between 2-3 decades ago, there was a sudden increase of adenocarcinomas (“glandular cancers”) of the lower esophagus usually in Caucasian males.  This event was noticeable in that the usual esophageal cancers were a different cell type, squamous cell carcinomas, that tended to occur in Black males.  Adenocarcinomas appeared to be correlated with gastroesophageal reflux disease (GERD), while squamous cell carcinomas (SCC) are associated with smoking and alcohol consumption.  These are tends, not absolutes.  GERD causes irritation of the cells of the lower esophagus resulting in conversion of the cell type (metaplasia) from squamous cells to columnar cells, the definition of Barrett’s esophagus.  Barrett’s, in turn, can progress to low grade dysplasia, high grade dysplasia, and adenocarcinoma.  Thus, it has been proposed that patients with at least weekly GERD symptoms (heartburn, regurgitation, and dysphagia, meaning difficulty swallowing) that have been present for at least 5 years, and who have multiple risk factors for esophageal adenocarcinoma including white ethnicity, male sex, older age, obesity and long duration of GERD undergo screening for Barrett’s esophagus.

Since the above recommendations were updated in 2011, my assumption is that no dysplasia was discovered on any of the 3 studies and risk of progression to cancer is low.  For the general population of patients with Barrett’s esophagus, the risk of esophageal adenocarcinoma is 0.5% per year.  Contrast this with 5-8% per year in patients with high grade dysplasia.  The risk for low grade dysplasia falls somewhere between these 2 extremes.

I’ve written previously about the limitations and risks of mass screening techniques, e.g., mammography for breast cancer, PSA testing for prostate cancer and PAP smears for cervical cancer.  The same applies to screening endoscopies for Barrett’s esophagus.  The procedure carries with it risks, including perforation and bleeding.  It’s also not very comfortable to have a hose snaked down your throat so that pre-anesthetics are sometimes necessary, creating more risk.  Random biopsies are performed because it’s sometimes difficult for the endoscopist to identify areas of dysplasia from just metaplastic cells, leading to falsely negative results.  In his new book “The Creative Destruction of Medicine”, Dr. Eric Topal opines “We’re not very good at detecting and fighting cancer.  The mass screening model, as with mammography or prostate specific antigen (PSA) testing……..is enormously expensive and leads to an untold number of false positive results and more unnecessary biopsy procedures.  Doing serial sensitive scans like PET or CT would likely make this problem worse, both by increasing the false positives and incidental findings and by exposing individuals to ionizing radiation that itself causes cancer.”  The use of innovative technologies such as circulating tumor cells (CTC), genomics (circulating DNA and RNA) and wireless sensors including implanted nanosensors are described.  Obviously, hope runs high that at least some of these techniques will be validated so that the ultimate goal, prevention, is achieved.

A recent report released by QuantiaMD aka @QuantiaMD and the CareContinuum Alliance (CCA) aka @CareContinuum is worth note. The survey was conducted by Frost & Sullivan in collaboration with QuantiaMD  and the Institute for Health Technology Transformation. 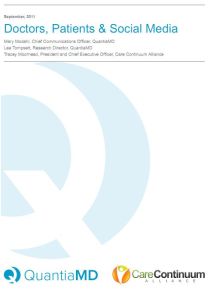 ‘Social media’ was defined to include: “not only social networking sites like Facebook and LinkedIn, but also professional and patient networking communities specific to the medical field, blogs and sites such as YouTube”).

Physicians are highly engaged with online networks and social media. Nearly 90% of physicians use at least one site for personal use, and over 65% for professional purposes. Overall, clinicians express significant interest in the potential applications of social media to their professions – whether via online physician communities, online patient communities or sites that could facilitate physician-patient interactions. A group of “Connected Clinicians” is using multiple social media sites for both personal and professional uses. These clinicians are the front-runners in applying social media to medicine, and are most eager to use it to positively impact patient care. Key take-aways from our study include:

• The vast majority of physicians are already using social media; Facebook tops the list for personal use, while online physician communities are driving professional use.

• Physicians familiar with online patient communities believe they positively impact patient health; however, awareness of these sites is low.

• Some 28% of physicians already use professional physician communities, with the highest enthusiasm around using them to learn from experts and peers.

• Clinicians see the potential in online interactions with patients to improve access to and quality of care, but concerns around patient privacy, liability and their compensation for such activities must be addressed.

• There is significant need for secure, convenient forms of electronic communication that clinicians can use to communicate with each other, and with patients.

• Over 20% of clinicians use 2 or more sites each for personal and professional use; these “Connected Clinicians” are the most eager to use social media to improve health care.

• There are opportunities for constituents across the health care system to use social media as a tool for improving patient care.

Our study included 4,033 clinicians and was conducted in August of 2011 on QuantiaMD. QuantiaMD is the leading mobile and online community serving over 125,000 physicians with opportunities to learn from, and exchange insights with, their peers and experts in their fields.